2. Industrial/Business services: Job applicant screening and placement testing services via web site, Testmasterinc.com. Batteries of tests for all types of employees and for heavy truck drivers.

Manuals for all above test products available on web sites. On the politicalpsychologyresearch.com web site, under Publications, are manuscripts, research reports, manuals, etc. for my research in political psychology, and tests and manuals for clinical, personal and industrial applications, published on Testmasterinc.com and at Funeducation.com and from me directly for my clinical tests. 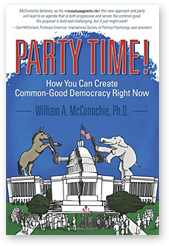 My article, "Putting Psychology into Peace Psychology" appeared in the Spring/Summer 2010 issue of Peace Psychology, the newsletter for Div. 48 of the APA. I've also published an article in a psychology of ecology journal on my data on concern for the environment and related traits.

I published a book on my political psychology research in Fall 2014, Party Time! How you can create common good democracy right now. It is available via Amazon as a paperback and e-book (http://amzn.to/1vLcQ8B).

80 years of research in industrial psychology shows that valid and reliable psychological test measures of intelligence, conscientiousness and other traits are the most effective tools for screening job applicants. We recommend that you have applicants fill out a written application, then take the above battery of tests, and then be interviewed if they pass the first two stages. Interviews are followed with other screening procedures, such as drug tests, physical exams, etc.

This procedure is expected to yield higher quality employees than by interviews, background checks, etc. without tests. Higher quality employees can be expected to be more productive, less problematic, stay on the job longer, get along better with other employees, have fewer accidents and injuries, and have fewer lost time due personal problems. It is expected that financial benefits will significantly outweigh the costs of using the tests as part of your screening process.

Indeed, because most people who pass the test battery will also pass the remaining screening processes, including interviews, background checks, etc., you can save money in the hiring process itself by needing to evaluate fewer candidates per new hire.

The first battery of tests was developed by Dr. mechanic he in the mid-80s for a heavy trucking company. They were having many accidents. The worker compensation costs were over $800,000 the year before the testing process was begun. The test was developed and used even though in-house performance data correlations showed no direct relationship between various in-house measures and test scores. The company used the tests to hire drivers during the next year, avoiding drivers with low scores on any of the 10 dimensions measured by the test battery, which included three measures of intelligence, five personality measures and two measures of factual knowledge specific to heavy trucking, including load handling skills and federal regulations. The worker comp costs that year dropped to only $100,000 the following year they dropped to 50,000 and the next year to 25,000. They subsequently won state and national safety awards. Their insurance company offered to buy the test battery from Dr. McConochie.

Dr. McConochie then developed the current generic battery offered at this website and provided testing services to other companies, including a street sweeper company, an engineering firm, a law firm and a computer chip manufacturing company. All of these companies were pleased with the results of these testing services. For example, the engineers at the computer chip manufacturing company said they had the best operators in the industry secondary to using the test battery for screening their job applicants. And there battery consisted only of the verbal and spatial intelligence tests and the tests for high school level math, English grammar, general science and chemistry. They later added the violence proneness test.itself by needing to evaluate fewer candidates per new hire.